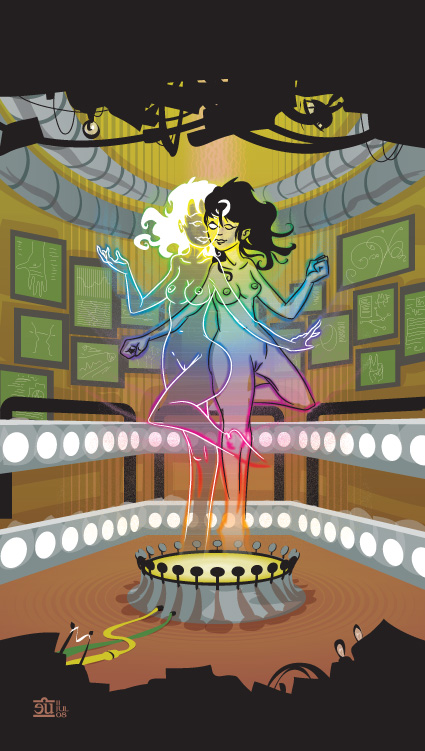 Are you here or are you there? Are you just the interference pattern of two or more sets of ripples in the universe? Why do you need to choose one or another? Light can be modeled as both a particle and a wave, after all. And the subatomic particles that you’re made of are vague smears of probability, rather than cute little electron planetoids orbiting a central sun of protons and neutrons. Oh, up here everything looks pretty solid and immutable, but get down close enough and things get pretty weird. And our tools are getting small enough that we’re beginning to have to wrangle with these effects; quantum computers that superimpose multiple states to arrive at a solution far faster than a machine based in classical physics ever could are slowly making their way from the experimental stages towards something you can use.

So maybe this/these woman/women is/are in the middle of an experiment to bringing that kind of weirdness to the real world, being put in a state of being simultaneously everywhere and nowhere.

Experiencing everywhere at once? What a concept. That’s like being something divine. Could you process all of that at once; could you *remember* being in that state afterwards? A direct channel to the Universe / to God / to the Vast Active Living Intelligence System / whateveryouwannacallit is a very different dataset than what the meatputers in our brains normally process. On the other hand there are folks poking at the low-level behavior of the neurons our brains are made up of, and finding some evidence of quantum operation. Maybe we *are* built for that kind of processing after all. I don’t want to be That Girl who uses ‘quantum’ as this month’s handwave for ‘explaining’ magic (the sixties vogue for ‘psi’ in SF has largely been replaced by vague blithering about ‘nanotech’ anyway) but, well, shit sure gets *weird* down at the bottom of reality.

Anyway! If you peer closely at the screens in the background you might notice a camel. You might also notice the vase/face illusion. And the moon, and a bubble chamber diagram, and a hand making a V-for-Victory… or is it a rude gesture? Interpret these symbols as you see fit, in whatever spiritual tradition suits you at the moment. (How many of those particular reality tunnels have you ventured down, anyway? After a while they all start to look like they’re describing the same thing. Or maybe your brain’s just an awesome similarity generator.)

Magickawockally, the Magician talks a damn good game, but the High Priestess get things *done* because she is *connected* in a way that few of the others in the motley crew of medieval archetypes down in the Earthly half of the Majors are. The Fool might be more connected, but she sure as hell doesn’t *know* it. The Priestess is busy consulting her Higher Self *right now*.

Or maybe she’s just an anthropomorphification of the eternal dance of Being and Nothingness. I mean, this is card number two, it’s gotta be about dualities sometimes, even though dualities are kinda boring and confining. But hey, binocular vision’s better than monocular, right?