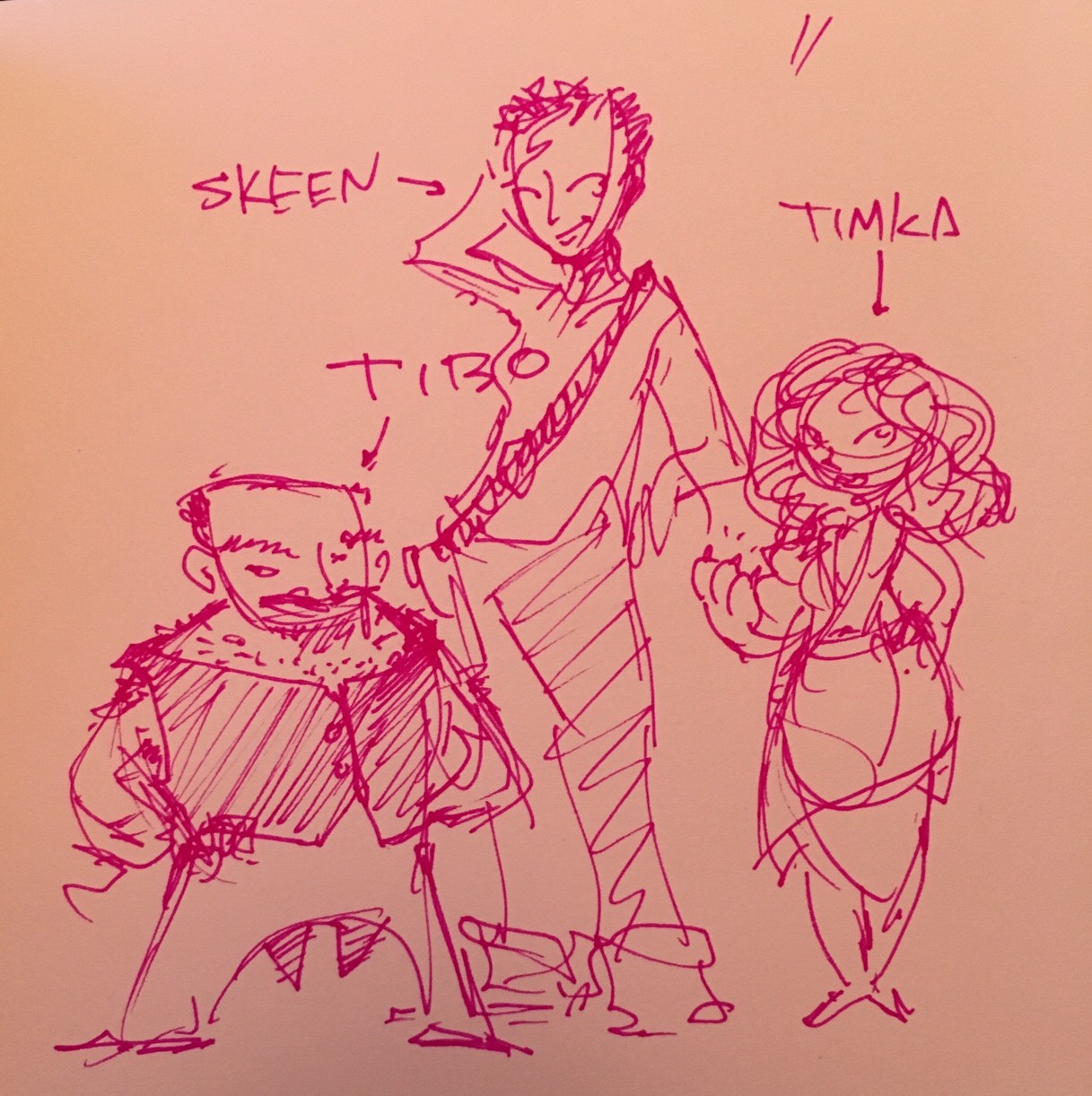 So. The Skeen trilogy by Jo Clayton turned out to be pretty decent. My opinion of it is probably a bit colored by nostalgia, but overall I feel like it was a fun bit of SF, told with competence, charm, and flair.

I also realized that it is pretty much right in the middle of my sweet spot. It contains:

Honestly, I'm primed to like a book with just three of these. Skeen delivers on all of them. The lady protagonist is a charming rogue named Skeen, whose jaundiced but hopeful view permeates the whole story. The shape shifter is a lady named Telka, who is her adventuring companion for almost the entire book. The crew of hangers-on, assistants, allies, and obligations Skeen collects through the first two books include a quartet of elfin teenage boys with sensory cillia for hair, a squat, solid scholar who reminds Skeen uncomfortably of her SO, another shifter whose default form is something insectile that I tend to think of as somewhere between an anthropomorphic spider and an anthropomorphic mantis, a small boy who can spit poison and is the last of his tribe, that boy's pet frilled lizard, and a lady flying squirrel who is one of the ancients who created the Gate to the semi-medieval planet this all happens on. Then Skeen gets back to the normal world, with nobody but the flying squirrel and the shifter, and we meet a whole new crew of weirdos: Skeen's squat, solid, ex-acrobatic partner in crime (and bed) Tibo, her charming and feminine spaceship Picafrey, a pair of fellow smugglers named Hopeless and the Virgin (two nearly identical black ladies, the former being two meters tall, the latter only one, and mute save for a bunch of mysterious Voices that follow her around), a young scoundrel who knows the way to the planet of the ancient flying squirrels… Taverns full of even weirder aliens, hopping from one planet to another. It's just a whole lot of fun.

(The queerness? Skeen and the scholar share some no-limits S&M sex a few times – it's never described but it's clearly both consensual and really hot, albeit rather closer to the edge than either is really comfortable with. There's a few other bits that I got a feeling of possible non-het sex happening outside the narrative gaze from, though it may have been wistful thinking.)

Is it great art? Nah. It's a fun story, charmingly told. The second and third books both drag a little at the end; it's clear that Skeen's obligations, and Clayton's narrative obligations, have grown larger than either of them is quite comfortable with, and Clayton becomes more prone to resort to leaning against the fourth wall and saying, look, if I continue at the level of detail I wrote the beginning at then we'll be here for twenty books, and neither of that really wants that, do we? This and that happens, if you really need more detail imagine it yourself, I'm skipping ahead to the next good bit. Which to be honest was not something I complained about at all. It's like, did anyone criticize Star Wars for not showing the trade negotiations? You're here for the pulp adventure, not the politics.

If you want to give it a shot, it shouldn't be too hard to find used copies online. You could probably find illegal e-books, too. I didn't find any sites I'd quite trust but you might be better at finding piles of book downloads. Sadly you can't buy an e-book; Clayton died before that became a thing, and didn't seem to leave any heirs interested in making a few bucks off these, or any of the thirty-odd books she wrote over her lifetime. I've got four more of them either on my coffee table or in the mail as I speak: the first four books of the Diadem series, her first stuff. I'm looking forwards to them.

I almost never bother drawing characters from books I like, and I liked it enough to actually do that. I might even draw a few more, and do something like finished images of them all.